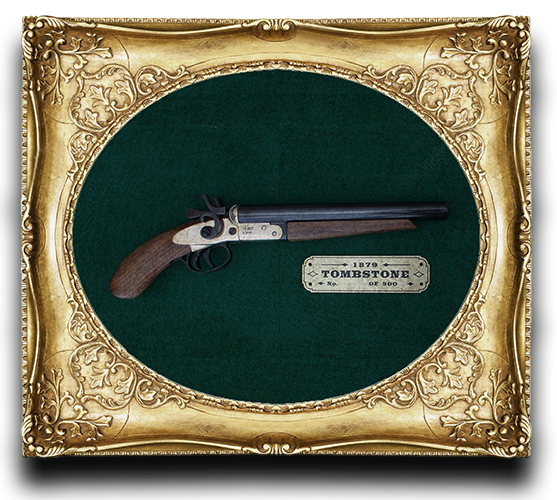 So what is a Gallery Gun?

Originally, the term Gallery guns or Parlor guns was given to small-caliber, low-powered target firearms introduced in the mid 1800's. Designed to be used in carnivals or indoor galleries, these recreational guns typically fired .22 caliber ammunition called Flobert rounds.  Earlier guns though, fired small 4.5mm lead balls propelled with just the use of Percussion Caps.  It's also important to note that they were not miniature variants of other guns.


Are Burke Gallery Guns the same as Miniature Firearms?

Good question!  Although our Gallery Guns do look very much like miniature versions of the full-size firearms they  commemorate, we call them 're-creations', as they are not meant to be exact copies.  This is because the term Miniature Firearms technically refers to identical copies of real guns, typically created in 1/3 scale.

Burke Gallery Guns are created in ½ scale (approx. 47%), and are functional as well as firing models!


How are Burke Gallery Guns designed?

Creating a model that functions realistically as well as fires projectiles is a difficult undertaking, as a complete redesign of almost every original component is required.  After the external design and proportion is created, a thorough re-engineering of the working mechanism is undertaken. Numerous prototypes are produced and tested, until we're satisfied with the overall design and functionality.

This is a rather simplified description of how it's done, as the process can take 6-8 months to create a single Gallery Gun model.


How are Burke Gallery Guns made?

Using no cast or plastic parts, our models are made entirely from CNC machined Chrome Moly, Brass, Stainless Steel, and Wood.

All the internal parts, hammers, triggers, and barrels are heat-treated for strength, and hand-polished prior to finishing.  Brass components are polished, and then left in a natural state, and the steel parts are given an authentic black-oxide (gun blue) finish.

All of the grips and stocks are CNC machine carved from select Walnut, and given a light polyurethane coating for protection.

Finally, all the finished components are carefully hand-fitted and tested, prior to packaging.


How do Burke Gallery Guns work?

Perhaps one of the greatest challenges of creating any type of miniature firearm, is to design it to to actually fire a projectile. Unless of course you have miniature ammunition, the firearm will need to have a system enabling it to utilize full-size munitions.

As we wanted to maintain the 19th century Gallery Gun tradition of low velocity, casual indoor or outdoor target shooting, we designed all of our models from the outset to shoot standard 4.5 mm BBs using off-the-shelf #10 Black Powder Percussion Caps as propellant.

In the case of our 1879 Tombstone model, a Percussion Cap is placed over each of the guns nipples', with a single BB loaded into the muzzle of each barrel.  A small, powerful magnet embedded in the barrel 'plug', prevents the BBs from falling out.  When struck by the hammers, the Percussion Caps detonate, sending rapidly expanding gases through the transfer ports at the breech of each barrel, propelling the BBs forward.

This is very much like a miniature version of the system used by 'cap and ball' guns from the 1800's, except that no gunpowder is used in our Gallery Guns.

In fact, using gunpowder or any type of propellant other than #10 Percussion Caps in our Gallery Guns can be downright dangerous, as they are not designed for the extra pressure. 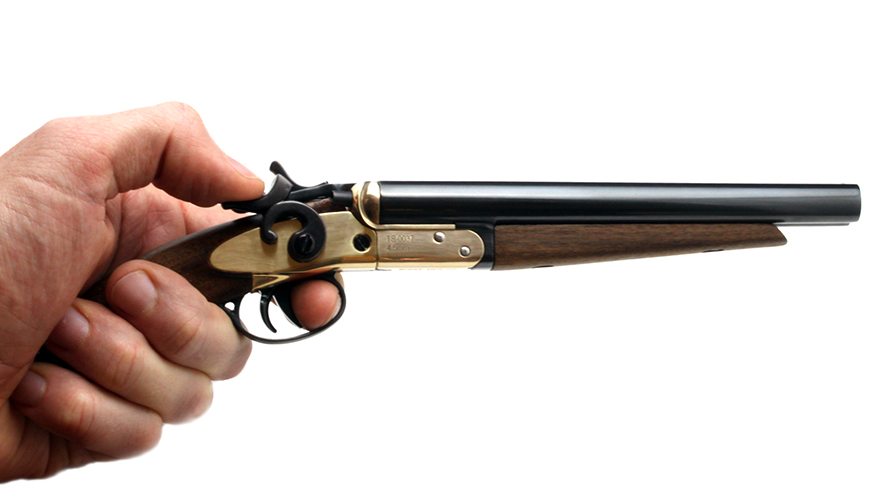